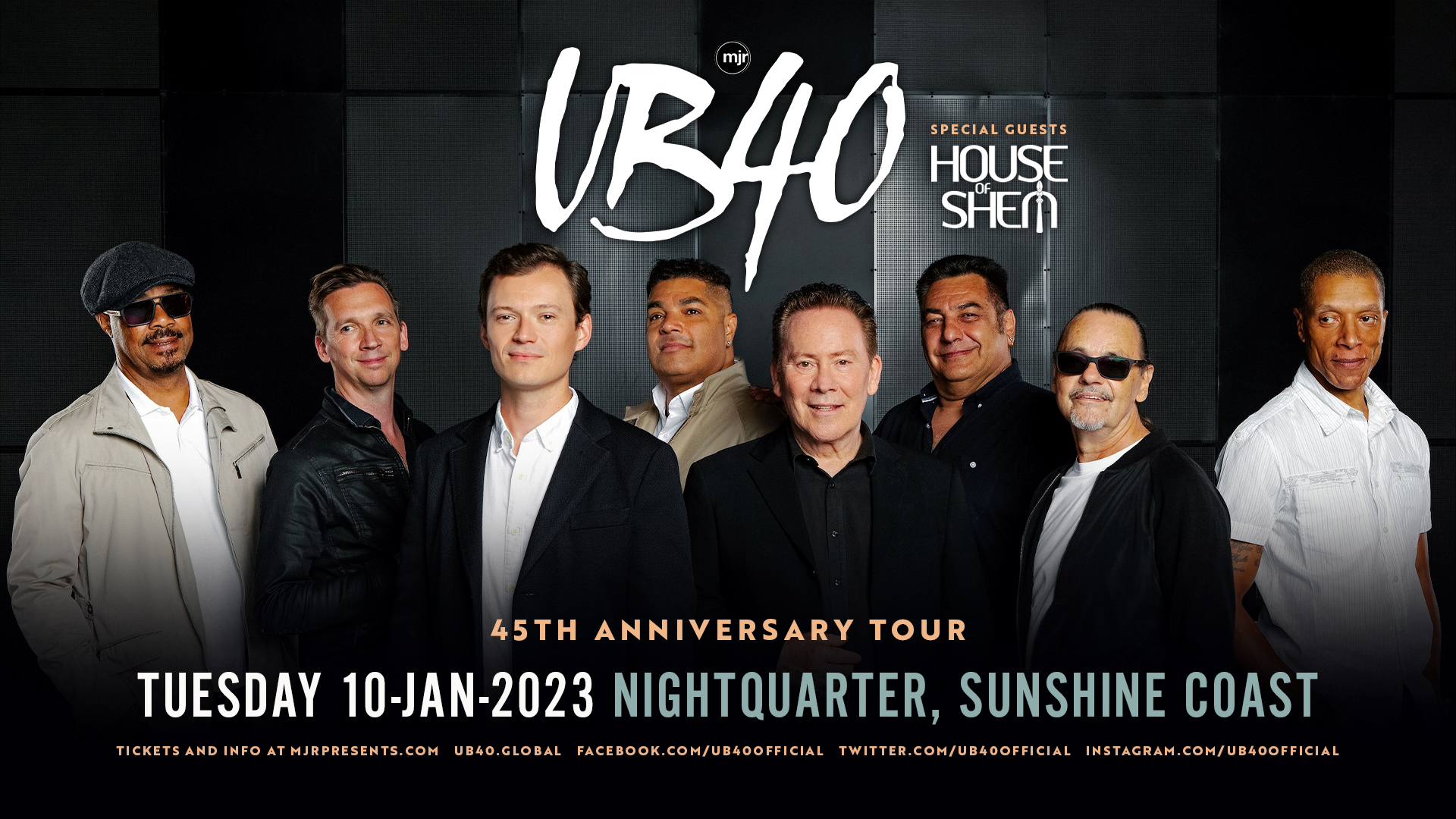 The event organisers have been in touch to let us know that UB40 '40TH ANNIVERSARY FOR THE MANY TOUR' @ NightQuarter scheduled for 04-Oct-2022 has been rescheduled to Tuesday, 10th January 2023

Due to unforeseen circumstances, UB40’s Australian tour will be rescheduled to the dates below in January 2023.

All ticket holders that can make the date simply need to keep their current ticket as they will remain valid. Any ticket holders who can’t make the new date can request a refund from their ticket provider before 29th June 2022.

We appreciate everyone holding on to their tickets just a little longer, as we know it’s worth the wait!

UK Legends UB40 have set their sights on
Australia for 2023! And they’re bringing along some friends.

The UK’s most successful Reggae band, UB40 have announced that their eagerly anticipated return to Australia will officially take place in January 2023.

Originally set to tour Australia in October 2020 as part of their 45th anniversary, and to perform hits from their latest releases ‘For The Many’ ‘Bigga Baggariddim’, the reggae pioneers will finally grace the shores of Australia 2023 with huge shows planned for the Sunshine Coast, Gold Coast, Brisbane, Sydney, Melbourne and Perth.

To mark the major milestone, the legendary UK band have also announced that their upcoming tour will include performances from House of Shem who also feature on the band’s latest album ‘Bigga Baggariddim’.

Despite the many unknowns in international touring, UB40 have stayed aggressively optimistic over the past 24 months, taking the time to perfect their brand new live show, just for Aussie audiences.

“We always look forward to trips down under. Said the band in a statement today “It’s one of our favourite places in the world to perform, but with so many uncertainties in the world these past two years, we felt it was far more important to focus on everyone’s safety. Now that borders have reopened, we’re finally ready to get back to Australia and perform the show fans have been waiting for!”

For those lucky enough to score passes to the band’s Australian tour, tickets will still remain valid for all upcoming shows.

Having previously sold out their 2015, 2017 and 2018 tours, the band return to Australia with plans for a more extensive tour hitting Sunshine Coast and The Gold Coast, as well as the more usual Brisbane, Sydney, Melbourne, and Perth

The ‘45th Anniversary Tour’ will offer audiences a taste of classic hits like ‘Food for Thought', '1 in 10', 'Red Red Wine’, ‘Kingston Town’ and ‘Can’t Help falling In Love With You’, as well as tracks from the latest releases ‘For The Many’ and ‘Bigga Baggariddim’ which will be performed live in Australia for the first time.

One of the UK biggest exports UB40 have achieved over forty top 40 hits in their native Britain with international sales of over 100 million records, the band are one of the biggest UK music acts of all time, and continue to record charting albums while touring across the world including regular trips to Australia where they have firmly found a place in the hearts of fans.

After four decades of success including their hit singles, international stadium tours and festival headline slots, the band suffered the devastating loss of founder member, lyricist and lead sax player Brian Travers who lost his long battle with cancer in 2021. Although "There is a giant Brian shaped hole that can never be filled", they continue with the surviving key founding members and songwriting core, staying true to and building on the legacy and ethos of the band. 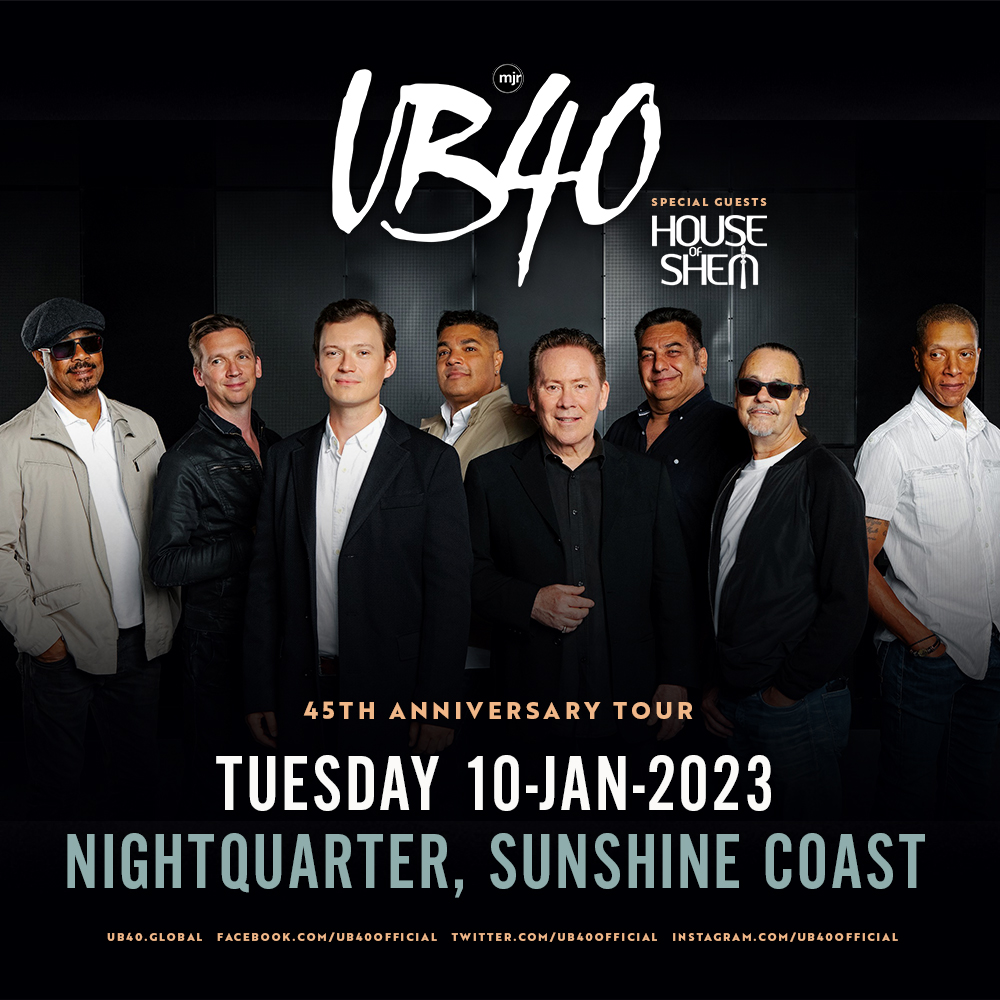 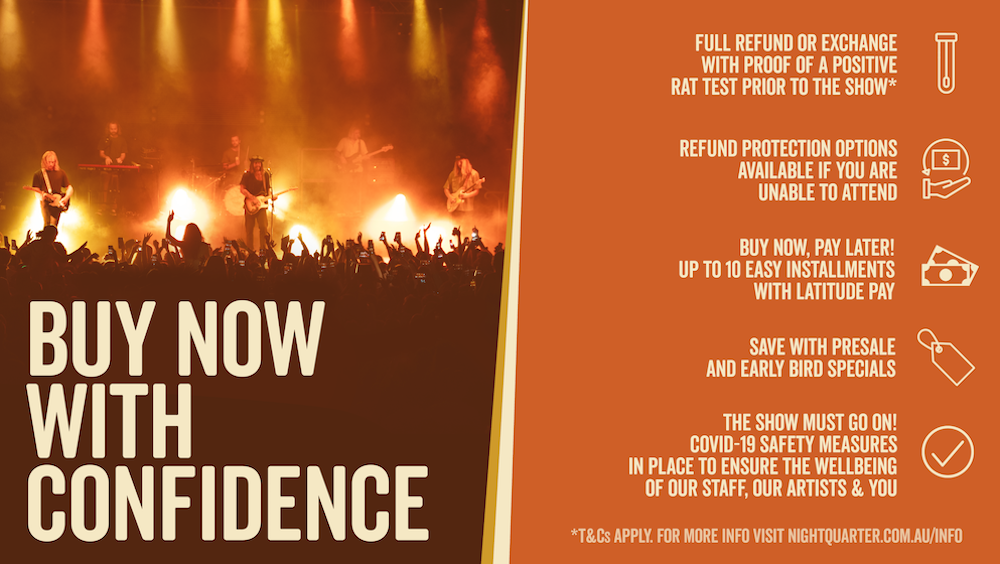