THE WOMBATS with Special Guests

Hobart City Hall, TAS
If you checkout without making all the selections you are entitled to, you will be able to return at a later time and choose your remaining options (simply log in to your Moshtix account and return to the event page).

British indie rockers, and one of Australia’s most loved acts, The Wombats will be touring Australia in June 2022!

The news accompanies today’s release of the band’s brand new single, ‘If You Ever Leave, I’m Coming With You’, along with the announcement that their fifth studio album, Fix Yourself, Not The World, will be available 7 January 2022.

The national tour cements The Wombats’ overt love of a trip down under with seven dates spanning shows in Perth, Hobart, Adelaide, Melbourne, Sydney, Canberra and Brisbane. 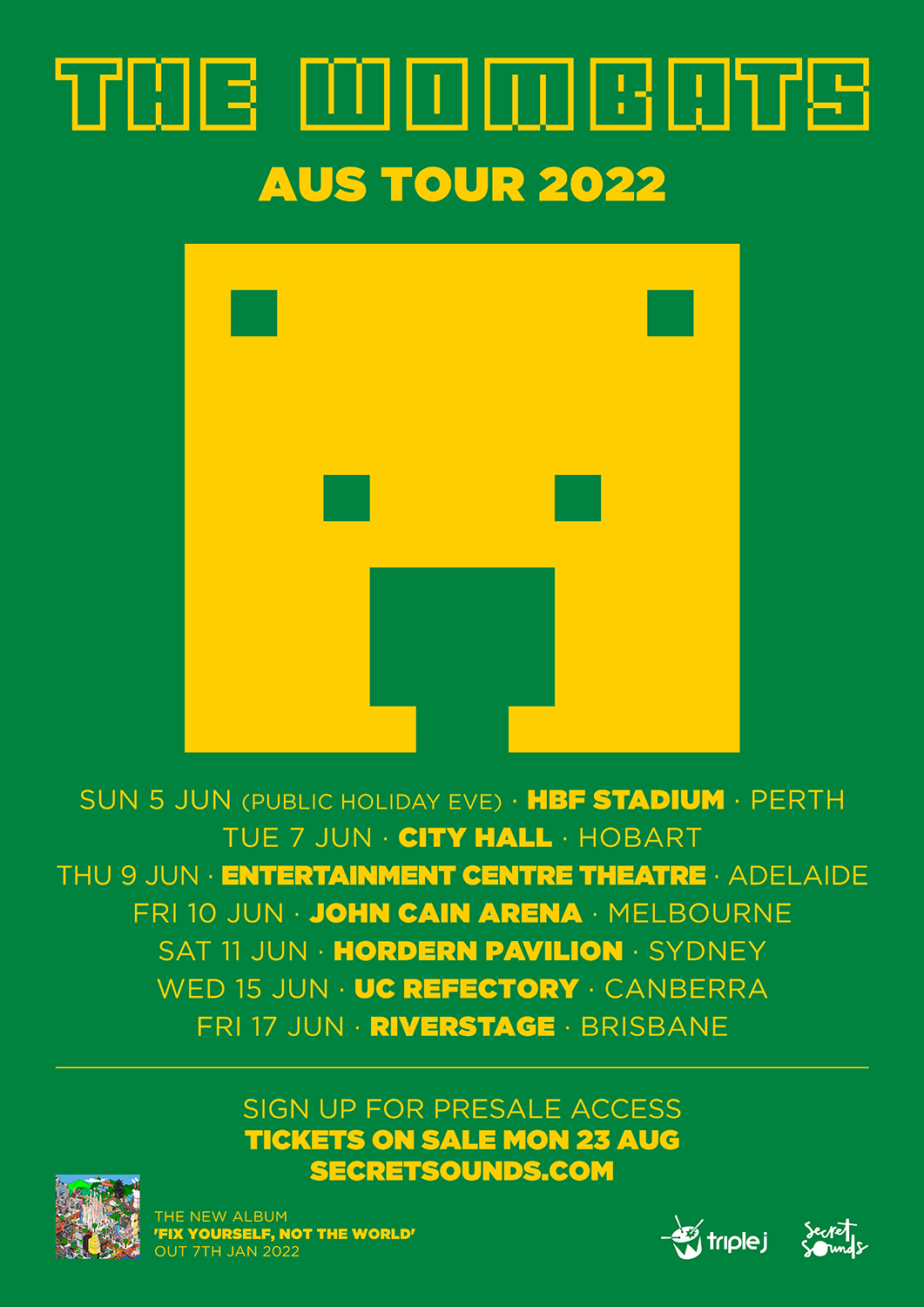 The Wombats’ welcomed trip to Australia will follow a bunch of huge shows for the band with them taking to the main stage at Reading & Leeds Festival and Neighbourhood Weekender this year, plus their biggest ever UK headline tour scheduled for 2022.

Following the cathartic ‘Method To The Madness’, The Wombats’ new single ‘If You Ever Leave, I'm Coming With You’ is an infectious electro-pop ode to obsessive devotion. It is the second track to be released from The Wombats’ upcoming album, Fix Yourself, Not The World, and is BBC Radio 1’s Future Sounds Hottest Record In The World.

The Wombats’ upcoming album was recorded remotely over the past year from each member’s respective home, with frontman Matthew “Murph” Murphy based in Los Angeles, bassist Tord Øverland Knudsen in Oslo and drummer Dan Haggis in London. The band worked with producers Jacknife Lee (U2, The Killers), Gabe Simon (Dua Lipa, Lana Del Rey), Paul Meaney (Twenty One Pilots, Nothing But Thieves), Mark Crew (Bastille, Rag‘n’Bone Man) and Mike Crossey (The 1975, The War on Drugs, Yungblud) on the record.

Fix Yourself, Not The World is some of the most captivating, inventive and forward-thinking music of the band’s career to date. We cannot wait to catch it live!

“To say we’re excited about coming back to Australia to play some shows is the understatement of the century, but hey, the English language can only do so much. So without further ado... WE ARE SO FORKING EXCITED TO ANNOUNCE THAT WE HAVE A NEW ALBUM COMING OUT IN JANUARY AND A TOUR, YES THAT’S RIGHT, SOME ACTUAL GIGS/CONCERTS/PERFORMANCES IN AUSTRALIA NEXT YEAR, CAN’T WAIT TO SEE YOU ALL!" D, M & T (The Wombats x).

The Wombats have toured the globe countless times during their 15-year career and played sets at the world’s major music festivals including Coachella, Lollapalooza and Glastonbury. They’ve remained favourites for Australian crowds, with three albums gracing the ARIA top 5, and multiple performances over the years at Splendour in the Grass, Groovin’ The Moo and Falls Festival.

The 2022 tour marks the continuation of the Liverpudlian trio’s love affair with Australia.

Fans can gain early access to the tour presale by pre-ordering Fix Yourself, Not The World here. General onsale starts at 9am local Monday 23 August via secretsounds.com.