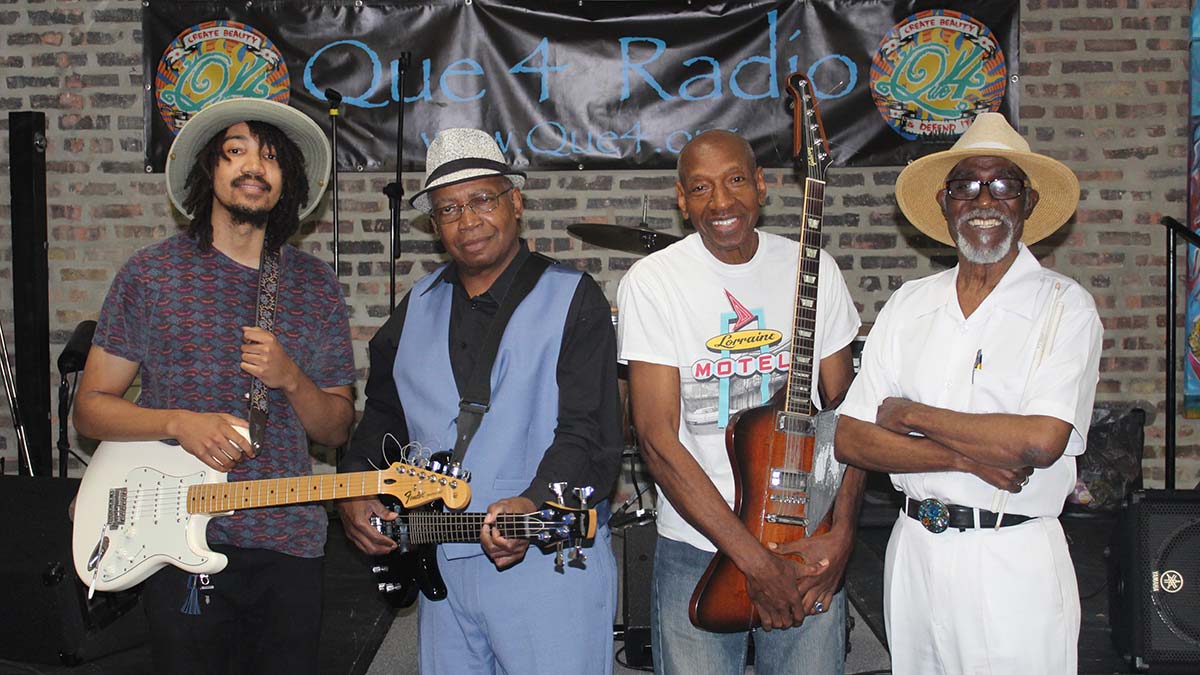 Hailing from Chicago, The Original Blues Allstars are the Blues band that Willie Dixon, the greatest Blues songwriter of his generation, put together as a touring band in the 1970’s. With Willie at the helm, the OCBAS toured and thrilled audiences for more than 10 years worldwide. The band re-formed more recently to carry on the legacy of the founders of the Chicago Blues.
The current line-up is headed by Freddie Dixon, bass player extraordinaire, who learned the instrument at the feet of his father, Willie Dixon. He has played and recorded with many of the greats of the Chicago Blues scene, and Freddie continues his father’s legacy by singing and playing the Blues worldwide.
The other Original Blues All Star is Dr. Jimmy Lee Tillman, the man who literally wrote the book on the art of blues drumming. He has played with Blues and R& B greats such as Jimmy Reed, Otis Rush, Syl Johnson, Tyrone Davis as well as Willie Dixon in the Original Chicago Blues All Stars. Dr Tillman has a PHD in Education, and is the founder of the University Life Community Center and the Farm School Intl.
Another Blues legend who has joined the band for this tour is DoktuRhuteMuuzic, (formerly Roy Hytower). Known as the Rhute Doctor, he was born and raised near Mobile Alabama, where he began his music career backing touring artists such as Ray Charles, Sam Cooke and Fats Domino. Doktu moved to Chicago in the 1960’s and immediately hooked up with legendary bluesman Otis Rush. The rest is history as the Rhute Doctor formed his owned bands and played live all over the world. He has appeared on stage and screen in addition to his music career.
Michael Damani, 24, is the youngest member of the band. Michael is also the leader of his own group as well as lead guitar for the funk group Tamarie T and the Elektra Kumpany. Michael was “discovered” at a weekly jam at Motor Row Brewing, in Chicago and quickly became a stalwart of the group. He has spent the last several years honing his skills as a guitarist of many genres and is excited to continue to develop his skills for all eternity.

The Original Blues Allstars will be supported by Bridie King (7.30pm) and Old Blood (9.45pm)

Bridie King is one of Australia’s most convincing blues pianists. Bridie can really pound the keyboard, creating an air of excitement around her performances which usually have the crowd on their feet. Her music spotlights a taste for hard driving swing, rolling boogie woogie and Southern r’n’b, with soul-drenched harmonies. Bridie has always adopted a philosophy of playing the music she really loves, something that is whole heartedly reflected in her every performance.
Bridie King has attracted many overseas performers to play as her special guests. They include Buddy Miles ( Jimi Hendrix Band), Jimmy Vaughan (Stevie Ray Vaughan and The Thunderbirds), Johnnie Johnson. and members of Dire Straits and Soko Richardson (Tina Turner's Band). She was invited as special guest to play with Blues guitar legend Albert Collins at Selina's, Coogee.

The Perth based, blues fueled five-piece Old Blood have been making waves in the local scene since their inception in 2011.
Celebrated as “the best live act around” (Tamara Szep, RTRFM), the band comprises of Tyler Ray Michie (Edie Green, Little Skye) on drums, bassist Shaun Liddell Jennings and guitarists Edo Ekic and Jules Peet; their modern blues stylings strung tightly together by the captivating stage presence of vocalist Tony Papa-Adams.