Crown and Anchor Hotel, SA
If you checkout without making all the selections you are entitled to, you will be able to return at a later time and choose your remaining options (simply log in to your Moshtix account and return to the event page).

Following their steadfast return with 'Fuzz Jam', today The Lazy Eyes announce their inaugural national tour, in support of their forthcoming debut album SongBook out in early 2022.

Since their undeniable breakthrough in 2020, The Lazy Eyes have become emblematic torchbearers of the next generation of Australia’s psych-rock scene, their reputation and talent spreading like word of mouth wildfire across projects, EP1 and EP2, including the hits 'Where’s My Brain???' and 'Cheesy Love Song'. From selling out numerous East Coast shows and the debut of their own music festival Lazyfest, acclaim has clammered both locally and globally for the band, across Complex, KCRW, BBC 6 Music and Radio 1, Bandcamp, SPIN, triple j Unearthed, FBi Radio and countless more, including their place in the NME 100 for 2021.

This April - May, The Lazy Eyes will travel across the country, debuting in The ACT, South and Western Australia, respectively, in celebration of their forthcoming debut album SongBook, alongside their recently announced appearance at Splendour In The Grass and sold-out tour supporting The Strokes.

With their debut album, SongBook, The Lazy Eyes open a world unto itself. Step inside: the colours are a little brighter; things move a little slower, but they’re liable to get inordinately faster in the blink of an eye. Suddenly you’re in a garden in full blossom, and you didn’t even notice; you walked a mile without taking a single step. With SongBook, they share the best Lazy Eyes songs written over the course of their first five years of infancy - but like every good fantasy world, it abides by its own logic.

SongBook is strange like that — all journey and all destination, a decidedly modern marvel of psych-rock that’s unpretentious in construction but precious where it counts. 'Fuzz Jam', the first taste of their debut full length, bolstered the group to the height of their powers, embraced by triple j as the #1 Most Played Song on the station in November, coupled with playlist support together with Unearthed, RAGE, 2SER and praise from NME, SPIN, FaceMelts, KCRW, FLOOD and others, including their place at #24 on the Shazam charts and Lauren Laverne's Spotlight Artist on 6 Music. Step inside, but be warned: Once you’re in The Lazy Eyes' world, you might not want to leave any time soon. 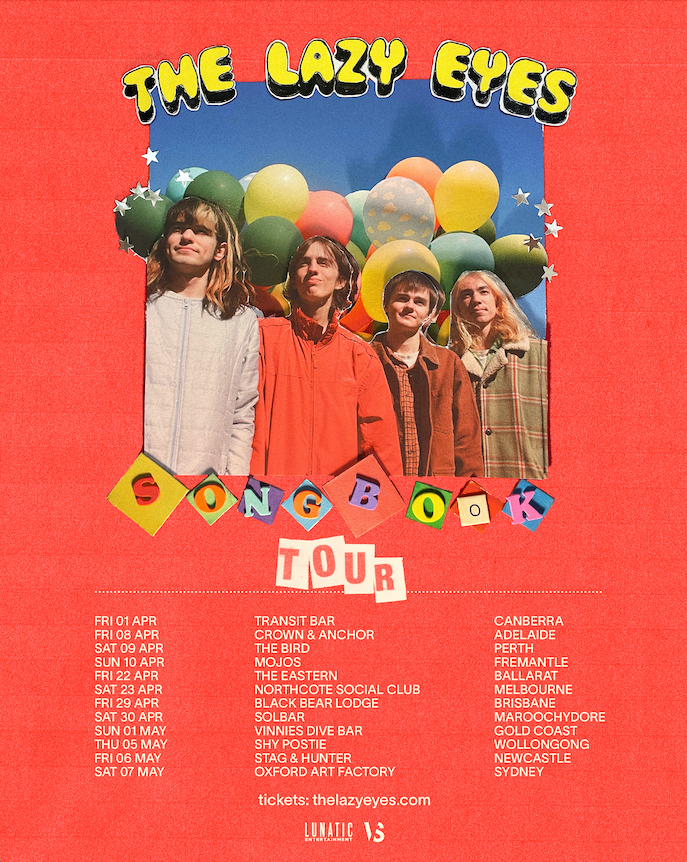 A diverse show with some of Adelaide's finest. more »