Roland Tings is back! After a year long hiatus spent writing music in regional Victoria, today Roland Tings has released new single ‘Hiding in the Bushes’.

Roland explains of the ‘Hiding in the Bushes’ song writing process and the background to the song title:

“I made this track when I was living in alone a house I rented on the Great Ocean Road two hours away from Melbourne, in the Otway National Park, for almost 18 months. I was spending a lot of time by myself, working on music all day every day. On the weekends my partner would come to visit which was a very welcome reprieve from the isolation of living in the middle of nowhere. We would often joke that i was sending myself crazy out there, with nobody to bounce off... She imagined a scenario in which when she arrived at the house and instead of me being inside making dinner I would have totally lost my mind and be outside in the national park, eyes wide, face covered in dirt, hiding in the bushes.

"I loved this image, the idea of getting away from the city to focus on art, but going way too far. Losing track of reality and going right off the deep end. In a lot of ways it was accurate, I did end up driving myself to distraction, living alone in the bush working on music 5 days a week with no human contact other than putting in my coffee order at the nearest town. The incompetent artist who jumps too far down the rabbit hole. By the end of the week it would take me some time to come back to normal, I would talk a million miles an hour and pour out every single thing I had thought of during that week. I feel like the track is infused with this type manic babbling energy.”

The tune features drumming collaborator Ryan D’Sylva and sees the two artists fuse together live drum recordings, samples and found sounds, which explores the interplay of man and machine, a blend of the synthetic and organic. Loose and grooving human drums processed with aggressive digital techniques, fluorescent digital synths and organic layers of field recordings are scattered through the background of the mix.

This instrumental track, inspired by diverse Australian landscapes, harks back to the sound of Roland’s lauded debut self-titled feature album and is sure to please fans who have been eagerly awaiting new music from the Melbourne based artist.

Since his debut 2012 EP of bubbling acid house on cult Los Angeles imprint 100% SILK, Roland continues to be one of Australia’s most interesting and eclectic electronic music artists. Gaining instant attention for his blistering live sets, Roland’s hyperactive energy and hypnotic synth programming lit up dancefloors at Melbourne’s most raucous house parties and basement clubs.

And now in 2019, as a celebration of his new single release Hiding In the Bushes, Roland Tings has also announced a nationwide DJ tour: 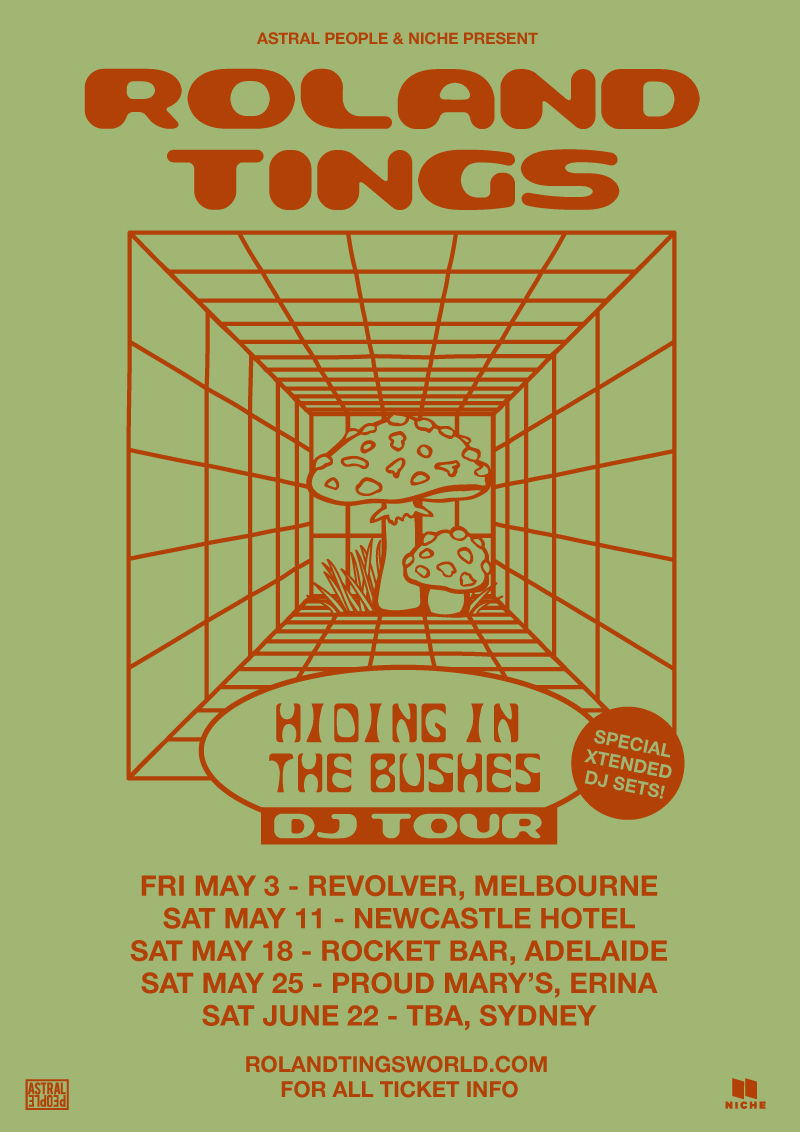