The people have been denied far too long – Totally Unicorn ditches the comfort of Sydney’s Inner West to pay tribute to their sophomore album Sorry. The band is going on holiday and the Sorry Album Tour will be vacationing at a town near you.

Along for the ride is fellow Sydney-siders ARSE. Elbowing their way onto the scene with the release of 2017’s Primitive Species – seven songs soaked in blue collar colloquialism and  nihilist humor – the noisy punk three-piece are a perfect match. It’s music that’s not afraid to get its hands dirty, nor to offer blunt social commentary at high volumes.

Refusing to subscribe to anything but its own autonomy, Totally Unicorn’s singles ‘Grub’ and ‘I’ll Be Fine Now’ are only the preamble to the band’s forthcoming album Sorry. Recorded in the heart of Adelaide with Ghostnote Studios head engineer James Balderston and musician/ producer Jonathan Boulet, the band’s follow up to 2016’s Dream Life is the band’s most ambitious yet. It’s imperative that it be witnessed in its most ideal setting – live, loud and loose.

Known for their frantic, booze-soaked and unpredictable live show, Totally Unicorn hit the road this April, armed with heaps of fresh number one hits. In tow for selected shows only is Japanese sludge band NoLA, along with a slew of TU’s current favourite local supports. 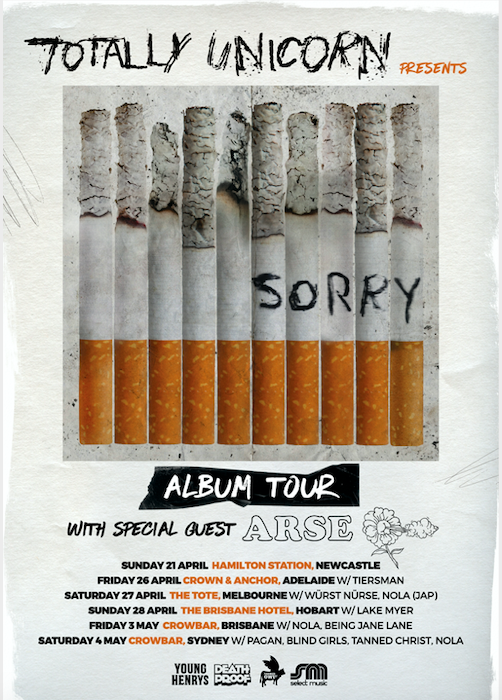 Maniacs, Churches of Steel Festival is back! After a brief hiatus due to the current pandemic Adelaide's festival dedicated to the old school, the melodic, the all-round heavy metal, and rock n' roll returns for its fifth edition! more »