After May this year saw G Flip sell out headline shows across Australia and Europe, the dynamic artist again brings her punchy, euphoric live show across the country in support of her debut album ‘ABOUT US’, out August 30.

Rising from bedroom producer to headline highlight in a few short years, G Flip – born Georgia Flipo – brings her expanding catalogue of hit electro-pop gems, featuring gold selling hits ‘About You’ ‘Killing My Time’, ‘Bring Me Home’, and ‘Drink Too Much that have racked up 30 million streams on Spotify alone.

“G Flip’s set was so inviting and varied, so funny and meaningful, that it’s hard to not to see a star in the making.”– LA Times

“Big, bold, and in almighty technicolour, Flipo's expressive sound is a battle cry against giving up... The best debut we’ve heard in months.”

– The Line of Best Fit

In the next step of the explosive performer’s whirlwind success story, G Flip brings new unfiltered hits, and undeniable charm to her biggest headline shows yet. 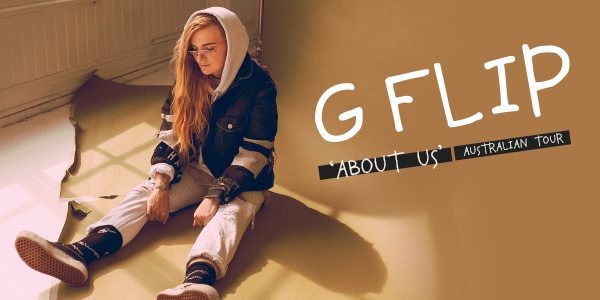