Freo.Social, WA
If you checkout without making all the selections you are entitled to, you will be able to return at a later time and choose your remaining options (simply log in to your Moshtix account and return to the event page).

NOASIS hit Freo for the first time as part of their Australian Supersonic Summer Tour. 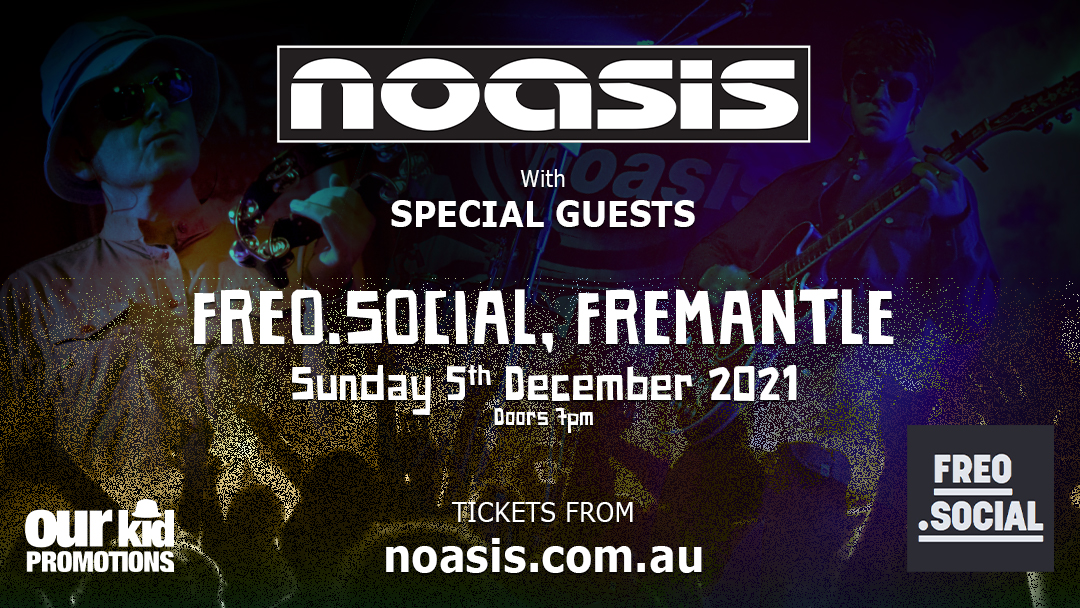 Originally formed in England, NOASIS were formed during the 90’s in the midst and mayhem of Brit Pop!

Now permanently based in South Australia, Noasis have fast cemented themselves as Australia’s #1 Oasis Tribute Show as they continue playing sold out shows across the continent since early 2020. Their tours have seen them perform to thousands in some of the country’s most iconic music venues, and continues to grow on both the Australian and International stage.

See the boys perform all the anthems that defined an entire generation including Roll with It, Supersonic, Cigarettes & Alcohol, Morning Glory, Go Let It Out, Some Might Say, Gas Panic, Hindu Times, Don’t Look Back in Anger, Wonderwall and more!

Whether you got to see Oasis 50 times or never quite made it to the front of the phone queue, this show captures the spirit and magic of what it was to witness one of England’s greatest rock bands. Delivered with attitude, style and in your face rock ‘n’ roll like it was originally intended.

So, grab your mates, bucket hats, shades and get set to go off for a show that promises to be the closest thing to the real thing… and an incredible night out. C’mon, you know.

“This is no pub cover band. Spiby doesn’t just imitate Liam; he channels him... noasis are the best reason to put on a parka and sing like you’re at Knebworth” - Scott Russell - The Creative Issue.

“Having watched them a couple of times live, it’s an absolutely awesome experience, and like nothing I have ever seen before.” - Alex Burrow - 101.5 Radio Adelaide.

SET TIMES ARE SUBJECT TO CHANGE FROM SHOW TO SHOW

PLEASE NOTE THE FOLLOWING:
When General Admission Ticket sales have closed on the day of the show they may still be available at the door on the night.

A booking fee applies to all advance tickets. (All quoted prices include tax).

VENUE INFO
*18+ Licensed  Show - Minors permitted with a legal guardian
Photo ID is essential, acceptable ID is a current and valid Australian Photo Drivers Licence or Passport
(Please check with the venue for any other acceptable forms of photo ID).
The venue reserves the right to refuse admission to any person.
Intoxicated persons will not be admitted.
Dangerous behaviour including Crowd Surfing, Stage Diving, Moshing and Violent Dancing is not allowed and will result in your immediate removal from this venue.
Inappropriate behaviour at this venue will lead to your banning.