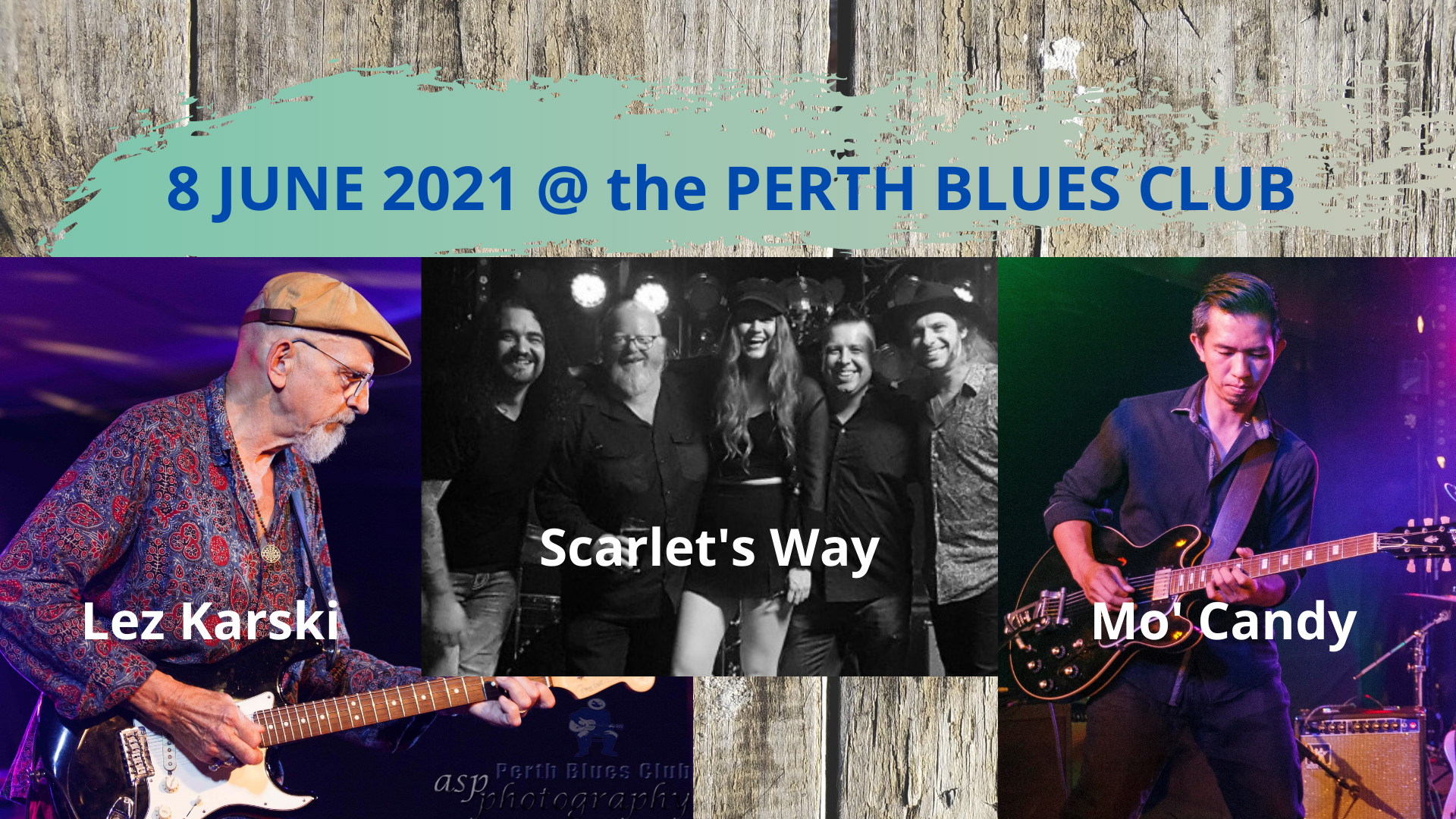 Producer of early Midnight Oil albums and ex-guitarist of the Hippos/Bondi Cigars, Lez Karski is a revered exponent of the Blues, par-excellence.
Lez’s upbeat solo performances are legendary and will leave you uplifted and ready to boogie.  His masterful command of the Blues, hewn from decades at the leading edge of the Australian Blues scene, has earned him a strong following nationally as well as in his adopted home of Perth.
Don’t miss your opportunity to experience solo Blues at its best!

have already travelled a long way to carve out their name. From Western Australia to East Nashville, and many stops along the way, they have done some miles recently. But given their hunger to perform, this journey has a long way to go!
The super-smooth duo is made up of the talented Katey Gabel (Lead Vocals) and highly regarded Shayne Savic (Guitar). Their trademark southern, roots-inspired brand of music brings lashings of Americana, accompanied by polished overtones synonymous with modern day Nashville.
Since releasing their first single No Fire, No Flames which reached #7 on the iTunes Country Charts in 2017, they have taken their music to the world. They released their second single Simple Life in 2018, accompanied by their debut music video. This video attracted over 30,000 views in just the first week and was quickly added to Foxtel’s Country Music Channel (CMC) demonstrating the duo’s growing popularity. This was followed by their third single “Let the Devil In”, this seductive track went onto receive impressive radio support, staying in the AMRAP top 10 for two straight weeks.
While the online and television attention is great, like all seasoned musicians, these guys do their best work live on stage. The act has been invited to play on multiple stages at Tamworth Country Music Festival and obviously made an impression. These performances opened doors to Nashville's Americana Fest and the Gympie Music Muster. Highlights of the duo’s performances over the last 18 months include performing at the world-renowned Bluebird Café and completing a national tour performing at theatres and venues throughout New South Wales, Victoria and Western Australia. They also took out the Emerging Artist Showcase and performed on Main Stage in their first year at the Gympie Music Muster in 2018. They were then promptly invited back with their band to be a part of a massive line-up in August 2019. The band’s first single since their debut EP release, “Move Your Body (Woah Oh Oh)” is a catchy, honky tonk style tune that is a tip of the hat to the Duo’s time in Nashville. The track is making waves, debuting at #9 on the iTunes Country Charts, with the corresponding music video being selected as part of WAM Festival’s ‘Mini Music Video Festival’ at the Rooftop Cinemas. If this is what Scarlet's Way can accomplish in such a short amount of time, what will the future bring! Aren't you curious to see what all the fuss is about? Shaun Street- Bass, Kim Siragusa- Keyboard and Mike Hagerty- Drums make up the rest of the band.

Trevor Jalla  on guitar cooking up a swingin’ mix of Texas shuffles, New Orleans funk, 60’s soul-jazz and gritty Chicago boogie.
The engine behind the band is the inimitable Hammond organ of Bob Patient. A blues icon in his own right, Patient is one of Australia ’s finest players and regularly performs with international acts including Eugene “Hideaway” Bridges and Dave Hole. His fat bass lines and thick chord-melody approach set up the foundation for the trio’s unique sound.
Drummer extraordinaire Joe Valentine is equally at home in the blues, jump, funk, soul-jazz and hard bop idioms. He adds a groove that draws deep from the rich history of African-American music, yet continues to push the band’s musical boundaries with a contemporary sound and approach.
Special guest and honorary 4th member of the band is Fremantle's own Bill Rogers (Zydecats) on honking tenor saxophone - bringing all the class, swagger and energy that always makes for a most memorable night.
Be sure to catch Mo' Candy for a mo' better time!