“Jess Day has a voice that somehow cuts through. Hours after hearing her

songs I can hear it in my head like it was playing real-time.”

Adelaide’s young revelation, Jess Day, has just released her latest single ‘Affection’. Day had already made a name for herself with ‘Why is She So Beautiful?’,which gained her the coveted spot of Feature Artist of triple j’s Unearthed, she then went on to release ‘Rabbit Hole’,receiving full rotation on triple j. She has featured on many of Spotify’s most noteworthy playlists including Front Left, The Local List, Indie Arrivals, Women of AU & NZ, Broad Chords, Chords & Cardigans and Fresh Finds: Index.

Talking about her inspiration for the song Jess said, “Affection is something I think that a lot of us crave and I wanted to explore the idea of how we respond when such an important and deeply human aspect of a relationship goes missing.”It is this raw contemplation, when partnered with her unforgettable melodies, that makes it so easy to fall in love with her every song.

Reminiscent of the girl grunge of the late 90s mixed with the optimism of modern indie-pop, Day’s heart on her sleeve approach to music is rapidly earning her a reputation for her insanely catchy tunes.

After recently returning from a national tour with beloved Australian band Boy & Bear, Jess joined Handpicked Festival amongst the likes of Amy Shark, Missy Higgins, and John Butler. Having recently inked a management deal with Wonderlick Entertainment, Day is ready to kick off 2020 by taking front and centre as she headlines shows in Sydney, Melbourne and Adelaide. 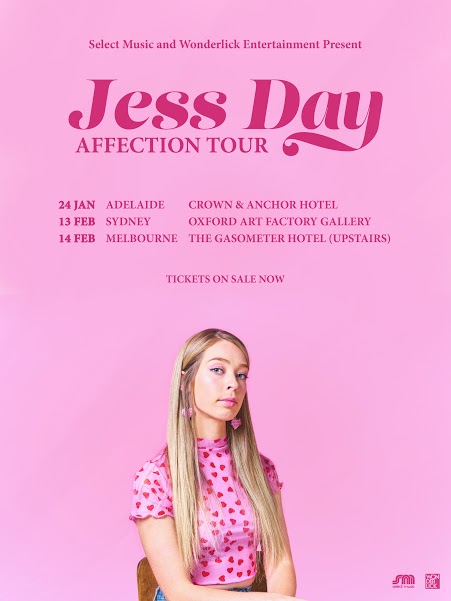