This event has been cancelled

Its not an American reality show- Its actually Aussies! From every state they have come after having competed locally to represent their state and are here now to compete at the nationals for a crown, a huge cash prize and a holiday! Dragnation Australia Season 5 is coming to Adelaide to test the skills of Drag performers from all over the country – all for your sport and entertainment!

Dragnation has 8 performers, all who competed in their state to win and make their way to the finals  in Adelaide to try and take home the crown. They have come from Brisbane, Sydney, Darwin, Hobart, Canberra, Perth, Melbourne and of course Adelaide who won the national title last year.

Adelaide is trying to keep their crown, to watch this will be like watching an episode of Days our lives in fast comedy mode!

Hosts Frock Hudson and Leasa Mann (MEL) are heading your way to deliver witty, camp and outright dirty commentary to a night of battles with hair, heels and of course hips! (Couch padding included) With crazy choreography in an epic 10 minute opening sure to leave you gagging or questioning yourself, special guest judges from around the states and a few special production numbers; your night is assured to be a messy one!

“I like drag, I like conflict so this just works, It amuses me because Im a little bent- but aren’t we all?”  Founder- Jacob Merchant

Dragnation was created to provide a platform for up and coming as well as establish Drag performers in Australia to share their craft, make connections and of course entertain, because that’s what they love! Who doesn’t love being someone else now and then?

VIP tickets available; Start at 8pm with afterparty entry; meet and greet of judges, cast and hosts served with a welcome drink and canapes. GA entry with afterparty starts at 9pm- with nibbles.

Dragnation is a nominee for both the Melbourne Drag Awards for best Drag event and in The Queens Ball Awards in Brisbane. 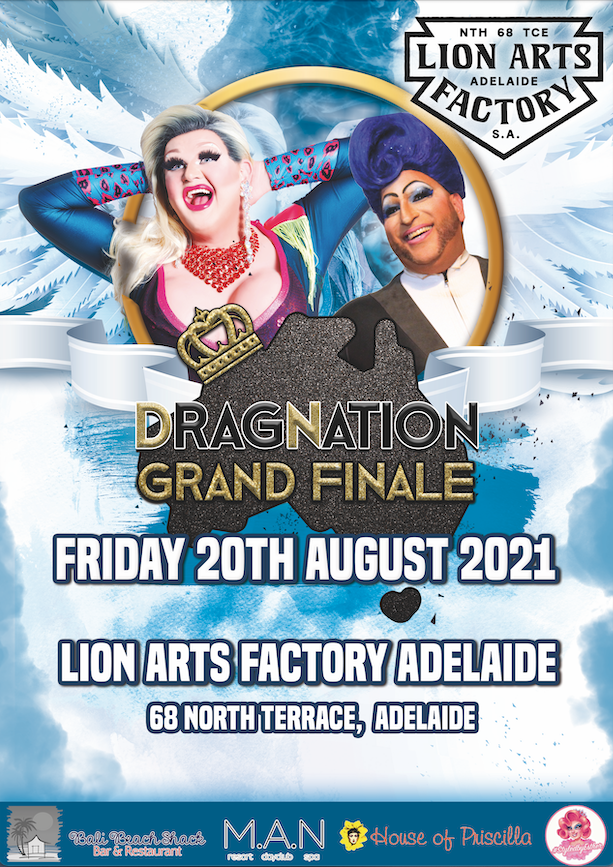 After 2 sell out sessions last year at the Adelaide Botanic Gardens NOISE//NATURE returns for a special edition screening at The Lab. more »

After 2 sell out sessions last year at the Adelaide Botanic Gardens NOISE//NATURE returns for a special edition screening at The Lab. more »

A New Initiative Calls On Australians To Support Homegrown Music

5th August, 2021 - A new initiative has been launched by the Australian...