LION ARTS FACTORY, ADELAIDE, SA
If you checkout without making all the selections you are entitled to, you will be able to return at a later time and choose your remaining options (simply log in to your Moshtix account and return to the event page).

It has been a two years for Australian rock fans with no new international tour announcements but that changes now. With borders finally open and restrictions lifted Silverback Touring is saying “f**k it” and giving fans a 1,2,3 count of unashamed rock n roll with two of the hottest live bands on the planet, BUCKCHERRY and FOZZY.

BUCKCHERRY recently dropped their incredible new and possibly best yet, album Hellbound and just this past week a frantic new video and single ‘5,4,3,2,1’. Whilst FOZZY have been tearing up the U.S. Billboard charts with their latest single ‘Sane’ whilst their anthemic track ‘Judas’ continues to amass huge numbers.

Multi-Platinum selling rockers BUCKCHERRY return to Australia armed with a new album Hellbound. BUCKCHERRY staunchly uphold the commandments of rock music with an arsenal of anthems primed to explode on impact live on stage and teeming with riotous energy, sexy swagger, and primal chops intact.  It’s something that the boys have done since day one, but it’s more necessary now than ever. With an array of classic such ‘Lit Up’, ‘Crazy Bit*h’, ‘Sorry’, ‘Say F*ck It’ and ‘All Night Long’, BUCKCHERRY are ready to once again party down under.

BUCKCHERRY is unique, complex, simple, passionate, explosive, original, and always a good time. BC has been my love, my pain, my passion and I'm so proud of what we have accomplished. I never knew when I started this that dedicating myself to music would be taking on so much responsibility. For a guy who never thought he was going to live past 30 this has been an incredible journey. Our ninth record Hellbound marks 22 years since our debut self-titled release and what an amazing roller coaster we have been on. From hit songs to platinum and gold records and millions of fans worldwide - all during a time period when traditional sounding hard rock bands didn't exist - except for BUCKCHERRY. We beat the odds and built our reputation on the live shows, and our "one of a kind" approach to every opportunity. – Josh Todd

After touring the world with the likes of Metallica, Kiss, Iron Maiden, Avenged Sevenfold, Shinedown and building a loyal fanbase for the better part of twenty years, FOZZY is the epitome of what a great rock n roll band should be: catchy, groovy, hooky, sweaty and most importantly, an AWESOME F**KIN TIME! With five consecutive TOP 30 singles, FOZZY is steadily becoming one of the most successful bands on Modern Rock Radio with one of the most electric live shows.

Joining both Buckcherry & Fozzy on their Australian tours are rock stalwarts and Aussie expats, MASSIVE, who have been flying the Aussie rock flag in Europe for the past decade. These are the first home soil shows for the band in a number of years which will appease their loyal and die hard following and be the perfect rock show appetiser. 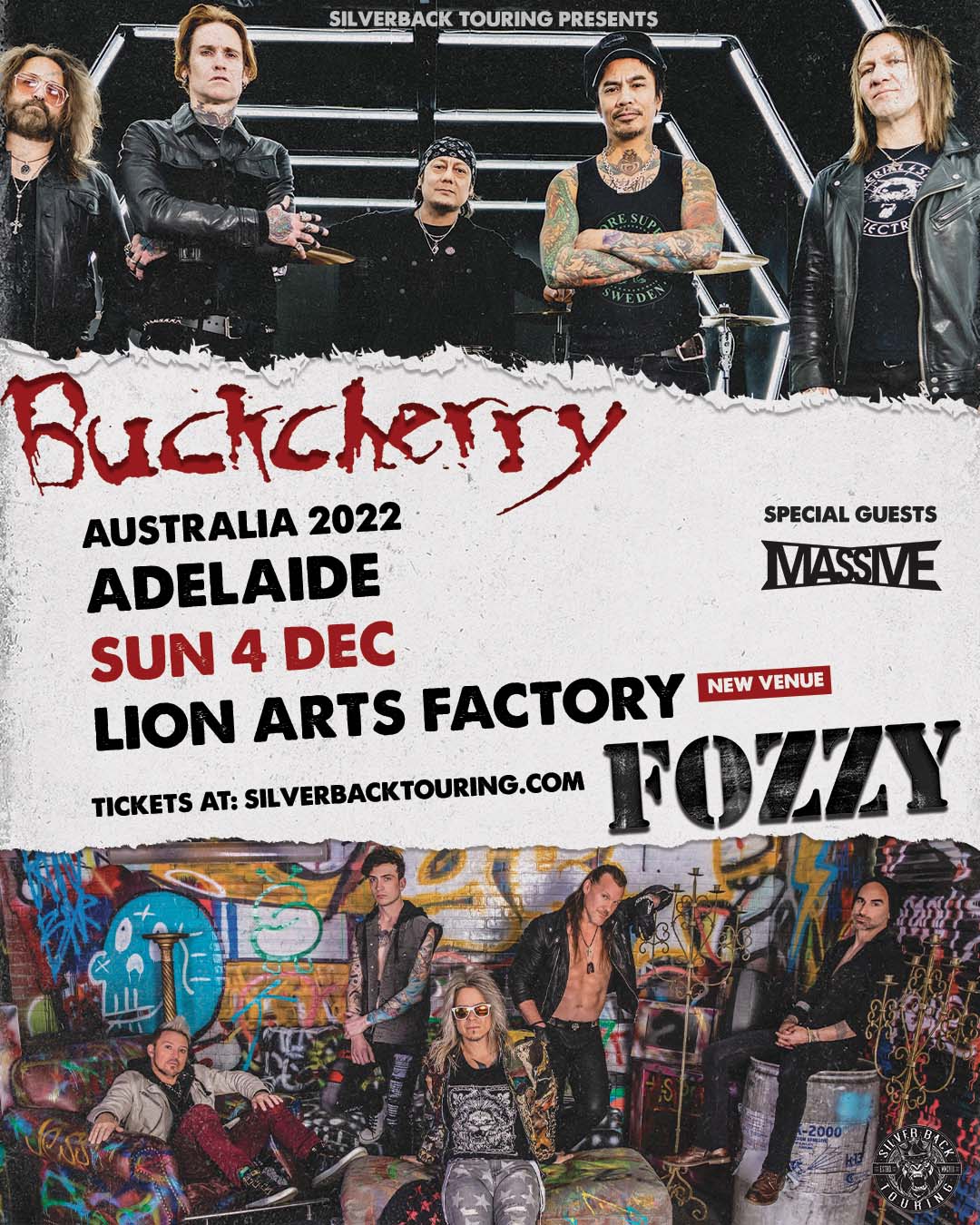