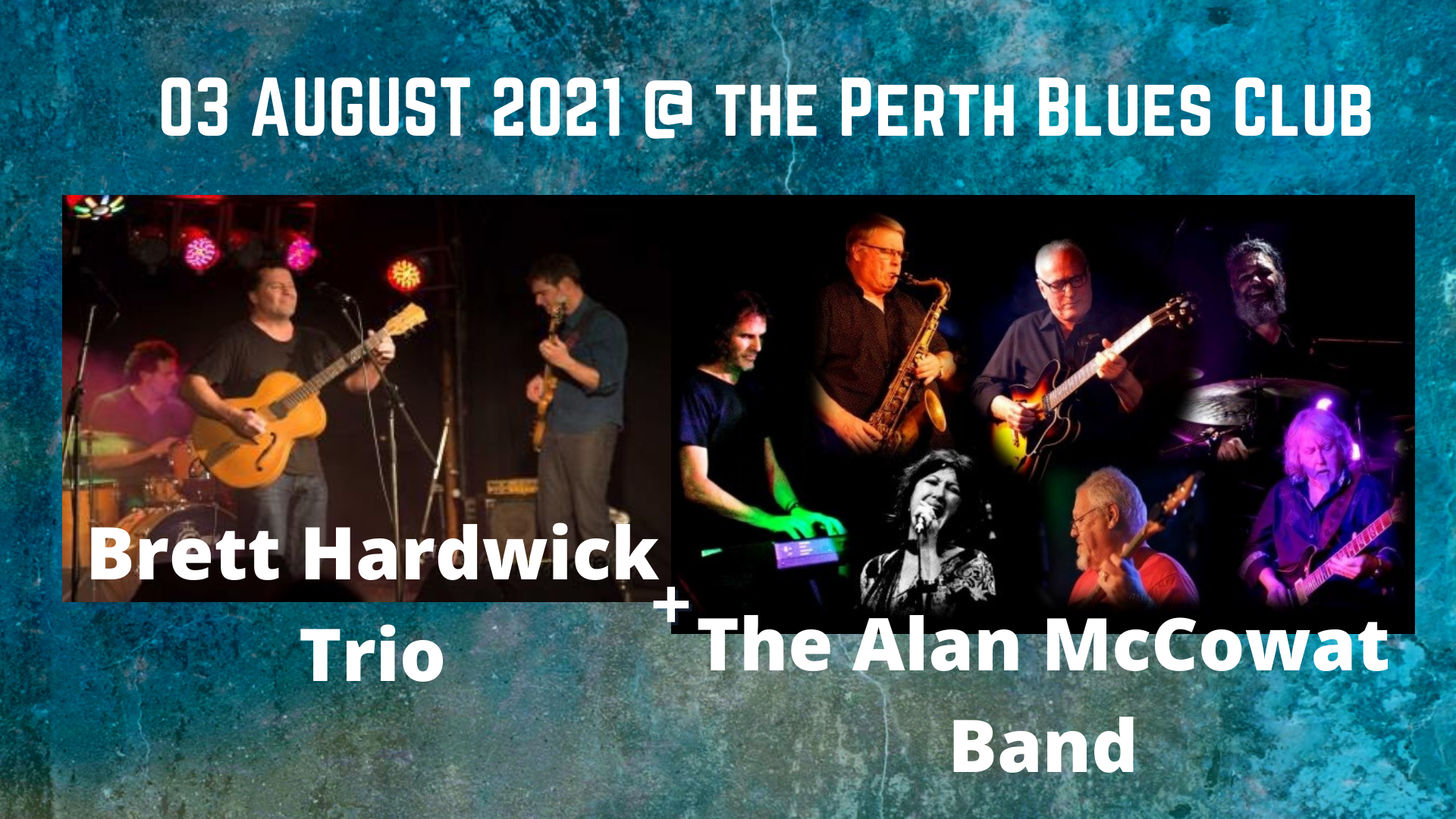 Brett is one of Perth’s best known guitarists. Mixing blues with jazz, funk, country and rock, he has forged his own style.
Beginning on the classical guitar at 6 years old, discovering Jimi Hendrix at 15, studying jazz at the WA Conservatorium and then working professionally in various Rock and contemporary bands has led Brett to a point where he fronts his own band, reinventing covers or performing originals. Acts he has supported include the Bull Sisters and Renae Geyer. Nominated for the 2007 Music Oz awards Brett is always inventive and original.

The Alan McCowat Band made their debut at Northern Blues & Roots in 2015 and played their first gig at Perth Blues club the same year and again in 2016 and 2019 so it’s been a while and now they’re ready to fire up and set the joint alight all over again! The night promises to keep the dancers and the listeners entertained with some classic and some more recent blues-based covers spiced up with a little soul and rock’n’roll to take you higher. Robert Cray, Etta James, Delbert McClinton, Imelda May & Blue Harlem, The Cashbox Kings, Hamilton Loomis, Renee` Geyer, The Blues Band, Edgar Winter’s White Trash and some vintage Clapton. It sounds like the right kind of mix for another magic night of the blues.
Featuring a stellar line up of well known, seasoned musicians who have joined together for their love of the blues and the joy of making music.
Alan McCowat (guitar & vocals).  Alan spent his teen years and early twenties in Whyalla SA playing in all sorts of bands to gain experience but his favourite thing was always the blues. Alan packed up and moved to Perth in the mid 70s and has worked in numerous popular Perth bands and played and toured with many well known artists over the years. Now it’s time to get back to the blues!
Paula Graham (vocals).Paula was born into a family of professional musicians and started off singing in church at age15. Popular Perth band “Mad if you don’t” kicked off Paula’s professional career in the 90s followed by regular appearances on morning tv shows, as backup singer for Tina Arena and support act for Paul Kelly, Warren Zeavon and Suzie Quatro. A Waapa showcase at the Italian Jazz festival featured Paula on vocals and as a co-writer, vocals on albums by Michael Pigneguy and funk jazz outfit Thrust. Live performances with local bands Baker Boys and Soul machine kept Paula busy at various venues on the Perth scene whilst teaching piano and vocals in her home studio and leading choirs extensively at many private Perth schools.
Steve Garde (guitar & vocals). Steve Garde and Alan first played together in Whyalla back in the 70s and both have been part of the Perth music scene since the early 80s. Steve was with the longest playing line up of legendary band The Jets, and later in the Riddum Shakers. For the last ten years Steve has been playing pub rock and blues with Men and Their Sheds at various venues around town and some memorable country events. PBC members will recognise Steve from his highly acclaimed performances at the club with many top line acts over the years.  “Looking forward to a great night with these guys”
Paul Reynolds (bass & vocals). "Paul has been playing music his whole life, and has been a professional musician for more than forty years. Paul has played bass in Down Under with the late John Meyer, played solo rock guitar in many bands, was several times guest rock vocalist with the WA Symphony Orchestra, a session singer including backing vocals on a recent Hank Marvin album, taught music at WAAPA, ACPA and Abmusic, ran his own studio while writing and recording jingles and original music. In his spare time…
Paul Millard (sax & flute). Paul has over 35 years professional experience as a freelance saxophonist and woodwind player and performs regularly in jazz, pop, rock and blues bands and with backing groups for National and International singers and theatrical productions. Singers have included Ray Charles, Sammy Davis Jnr, Natalie Cole and Hugh Jackman, theatrical shows such as Chicago, Matilda and Singing In The Rain and with numerous local Perth singers and bands, The Three Kings Blues Revue, James Flynn Little Big Band, Juliana Arias & The Bossa Nova Babies, Alan McCowat Band and Bloozology. Paul also leads his own ensembles Straight Ahead Big Band and the Paul Millard Quartet.
Ivan Shaw (keyboard)Ivan has played keyboards most of his life. He's been with some of Perth's regular line-ups for many years, playing RnB, Funk, Originals, Pop, Rock, Jazz, Gospel, Classical - you name it, he's done it - with many of Perth's top musicians. Ivan plays saxophone too, honing his craft at WAAPA, where he also studied Jazz Arranging. He simply loves playing music.
Sam Pettit (drums). Sam has played drums with many well-known bands in NSW and WA over the years. Currently he working with original band 46 Brigade and is a long-time member of Daren Reid’s band. Sam also produces drum recordings from his own studio ‘Fatback Productions’ as well as finding time for his Rugby League podcast ‘League Indeed!’